By Zachary Mushkatel on December 5, 2018 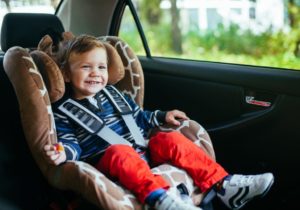 In Arizona, motor vehicle accidents are the most common cause of preventable deaths of children. As NPR reports, a study published in The Journal of Pediatrics in 2017 found that 43 percent of children who died in a car crash were not properly buckled in or wearing a seat belt at all.

Using the appropriate car seat drastically reduces a child’s risk of injury or death in a car accident. Unfortunately, new parents in Arizona may be unaware of a law that requires certain children to be in age-appropriate “restraint systems” when riding in automobiles.

The Arizona car seat/booster seat law, enacted in 2012, increased the age from 5 to 8 for graduating to seat belts. The law also addresses the transition from a car seat for babies and toddlers to a child’s booster seat.

The law and its application can be confusing. Still, given the injury risks to children, the need to know the law should be a top priority. We offer the below tips based on information from the City of Scottsdale Fire Department, Mesa Fire and Medical Department and AAA of Arizona and AZDOT.

Under current Arizona law, a child in a passenger vehicle must be in a car seat or a booster seat if he or she is:

A child who is younger than 5 years old must ride in a child safety seat. Children should ride in a rear-facing seat until age 1 and a weight of 20 pounds. They may then use a forward-facing car seat. Car seats should be held in place with seat belts and have harnesses that secure the child within the hard-plastic, cushioned shell of the car seat.

A child is properly positioned and secured in a car safety seat when:

A child who is 5 to 7 years old may ride in a booster seat. Vehicle manufacturers make seats and seat belts for the typical adult, who they expect to be at least 4 feet, 9 inches tall. A booster seat raises the child to safely fit a vehicle’s seat belt.

For a child in a booster seat, the seat belt’s:

A seat belt must fit a child correctly to protect the child in a car crash. This means:

If a seat belt does not fit as described, the child should ride in a belt-positioning booster seat.

Some states cite proper weight as part of their requirements for children to move from car seats to booster seats and seat belts. However, height is considered a better indicator for how well a safety belt properly fits a child. So, the Arizona law is silent on children’s weight.

No Arizona law requires it, but some safety experts say children should ride in a car’s rear seats until the age of 13.

An adult who is found to be transporting a child in violation of Arizona’s car seat law can be fined $50. However, the fine will be waived if the driver or car owner can show that, after being ticketed, the adult obtained a child safety seat or booster seat. Mailing a receipt to the court is enough to show compliance and get the fine waived.

The Mesa Fire and Safety Department says that, due to current vehicle designs, records of child growth patterns, and general lessons learned through observation, many advocates have concluded that seat belts won’t fit children correctly until they are 8, 9, 10 or even 11 years old. “As a result of this fact, combined with the fact that boosters are not yet widely used, we see a great number of serious (and fatal) injuries to children,” the department’s website says.

Sadly, we hear of similar results when our attorneys speak to grieving parents of young car crash victims in Phoenix, Sun City, Scottsdale, Mesa and Surprise. Young children are particularly vulnerable in car accidents, in part, because they are less likely to be aware as a crash starts to happen. So, they may fail to brace for it, or they may not know how to prepare for the impact of a collision even if they do see it coming.

After a child is injured in a car accident, parents may seek compensation from the other driver if the other driver is at fault. In some cases, if a properly installed car safety seat or booster, or seat belts or air bags failed, and the failure contributed to the child’s injuries, a claim against the manufacturer may be pursued.

Contact Mushkatel, Robbins & Becker, PLLC, if you have been injured in a car accident that was not your fault, or if your loved one suffered injuries in a crash. We will protect your rights and help you to pursue compensation you deserve. Call or reach us online for a free, no-obligation legal consultation today.

Zachary Mushkatel is an Arizona native who earned his undergraduate degree from the University of Arizona in 2001 and his law degree from the University of Minnesota Law School in 2004. After serving as a public defender, he entered into private practice and, ultimately, joined forces with Mathis Becker to form the law firm known today as Mushkatel, Robbins & Becker, PLLC. In addition to criminal law, Mushkatel practices civil litigation, with a focus on estate litigation and personal injury cases. He also serves on the Board of Directors for the Surprise Regional Chamber of Commerce and Sun Valley Lodge, and he is an executive officer and member of the Board of Directors for the West Maricopa County Bar Association.

Call for a Free Consultation